"Propspeed to eliminate marine growth on the tag’s surface was essential, as biofouling can prevent tag sensors from functioning properly."

Widely feared yet deeply misunderstood, the great white is one of nature’s most fascinating species. This Shark Week, we celebrate our fine finned friends with a “killer” update from marine researchers in California.

Back in September 2016, Propspeed International donated Propspeed to a study being launched by the Monterey Bay Aquarium Research Institute (MBARI). Involving the satellite tagging of great white sharks, the project used pop-up archival transmitting (PAT) tags made by Wildlife Computers to collect and transmit data. These satellite tags jettison from the shark they’re attached to on a preprogrammed date and are then retrieved and their data analyzed, with the goal of better understanding shark behavior.

One of the obstacles researchers face is the biofouling of these tags, where marine growth interferes with data collection and transmission. That’s where Propspeed foul-release coating comes in, one of two products specifically recommended by Wildlife Computers to keep the tags clean and transmitting clearly. Wildlife Computers even offers tags precoated with Propspeed.

We checked in with Chuck in March 2017, as he and his team were gearing up for the year’s shark season: “Young-of-the-year white sharks are seen now through the end of the year,” he said, explaining that sharks often come in live as by-catch from commercial fishing but that they expected to actively fish for them as well. 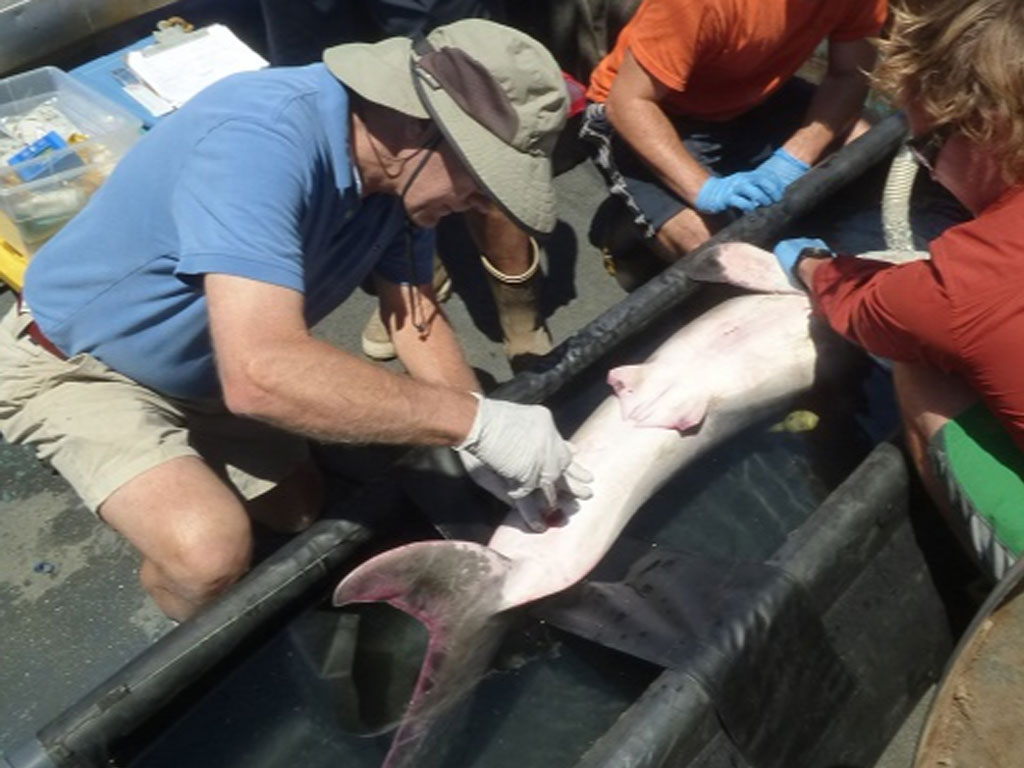 In addition to Wildlife Computers’ PAT tags, the MBARI team used a special tag that they had developed themselves, called a Smart Tag. The Smart Tag, which attaches via a noninvasive dorsal-fin grip that doesn’t harm the sharks, incorporates an accelerometer and a camera and “has been tested on white sharks for short durations but is still evolving. Multiple-month deployments are anticipated.”

Chuck’s job was to recover the tags once they had been released, usually somewhere in Southern California but sometimes further afield—not always an easy task.

“They can drift many miles offshore or end up on beaches or in breakwaters, where they can become deeply embedded in riprap rocks. The last satellite tag released from a five-foot great white shark drifted up on the beach and wasn’t recognized as a fish tag,” he said. “It held some important data. Fortunately, I was able to track it with a direction finder to a trash can on the beach! It had been put in a coffee cup and discarded."

To facilitate retrieval, Chuck is always aiming “to improve the markings that we put on our tags,” which typically include return-to-sender-type info. “Besides being nontoxic, Propspeed is clear, which allows our labels to show through.”

In July 2018, just in time for the 30th edition of the Discovery Channel’s popular Shark Week, “We are now better informed about the habits and migrations of white sharks along the California and Mexican coasts and have published a number of papers using tag data. You wouldn’t think of putting a boat in the harbor without bottom paint. Nor should you put fish tags in the water without proper biofouling protection to keep them functioning and to reduce drag.”

"You wouldn’t think of putting a boat in the harbor without bottom paint. Nor should you put fish tags in the water without proper biofouling protection to keep them functioning and to reduce drag.”"