"There are imitators, but only Propspeed has a long positive track record."

In preparation for a grueling crossing of the Indian Ocean, sailors Patrick and Rebecca Childress had Propspeed applied to the Kiwiprop on their Galant 40, Brick House. 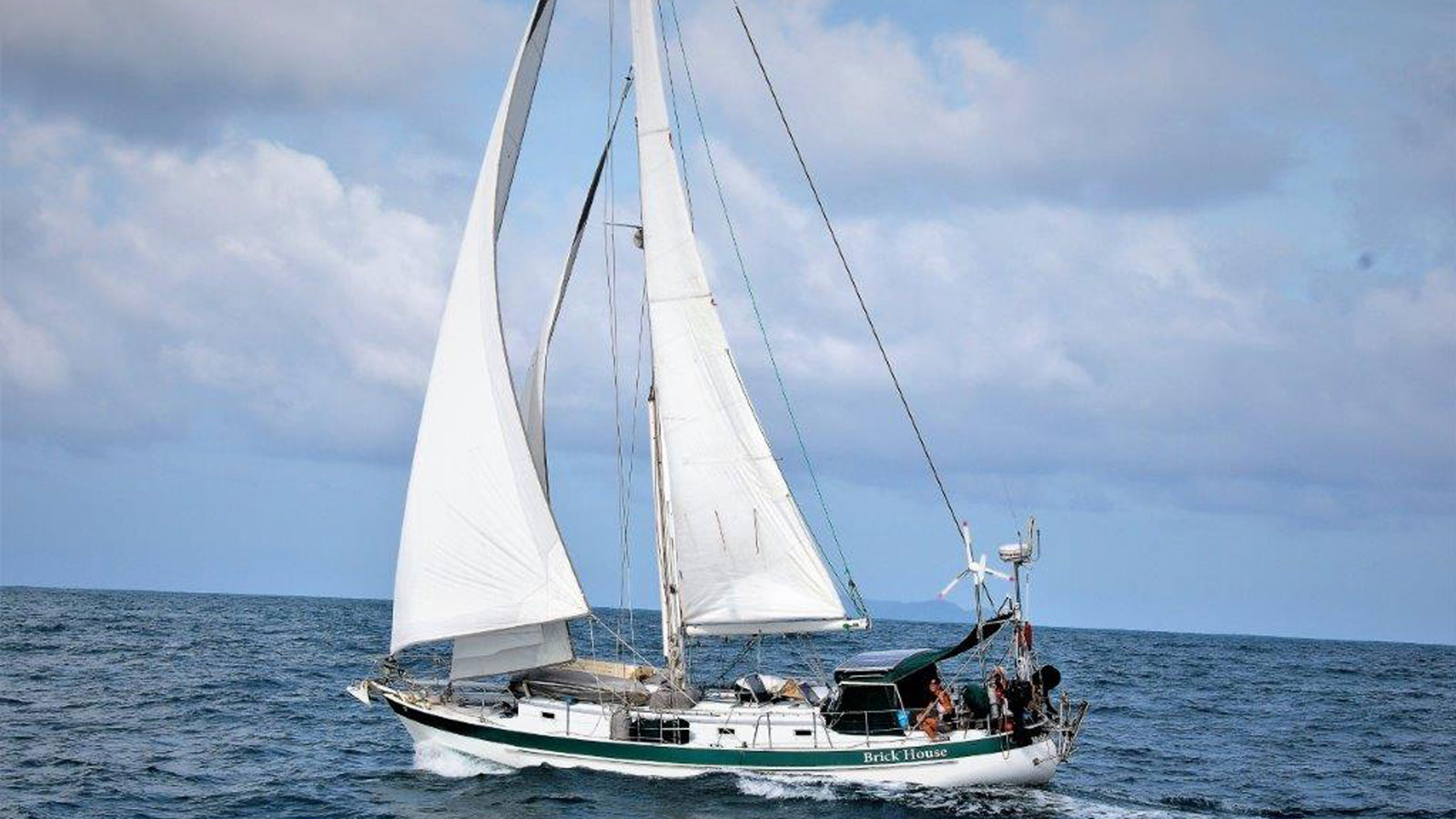 In 1979, Patrick Childress set off on a solo circumnavigation of the globe aboard his Catalina 27-footer, Juggernaut. At the tender age of 14, Patrick had seen a CBS evening news report on the successful solo Atlantic crossing of Robert Manry, a copy editor from Ohio, in 1965. “It lit an idea in my head that would never fade,” he says. Patrick’s own journey, which would take three years, gave him “enough adventures to last three lifetimes.”

Fortunately, he had enough adventurous spirit left in him to try it again, this time in 2008 with his wife, Rebecca, an accomplished sailor in her own right. Her boat, Brick House, became their boat when the couple wed in 2007. A 1976 Valiant 40,  Brick House has been thoughtfully updated with enough bells and whistles to keep the couple safe and comfortable at sea, where they’ve spent the better part of the last 10 years.

“Some people would say our boat is decked out,” Patrick says. “I would say it is sensibly fitted out for a couple with some resources to do things right, without wasting money or making things terribly complicated.”

In preparation for a particularly gruelling leg zigzagging the Indian Ocean, Patrick and Rebecca have made several upgrades: a Raymarine eS128 chart plotter, Morningstar ProStar MPPT-25 solar controller and 265-watt solar panel, 125 percent Mack Sails Genoa, 60-pound Manson Supreme anchor and titanium bow roller. Sailing from Malaysia to South Africa via Madagascar, with many remote islands in between, “Thousand-mile-long passages and longer abound. Once again, we will be in belts of strong weather. In the Indian [Ocean], yachting facilities are few. The boat must be in solid, long-haul condition.”

An important part of these yearlong preparations was the application of Propspeed. “I’ve never been able to keep antifouling on any propeller that was installed on  Brick House, no matter what material the prop was made of. Antifouling far too soon disappeared, which meant the biweekly chore of scrubbing marine growth from the prop and drive shaft.” 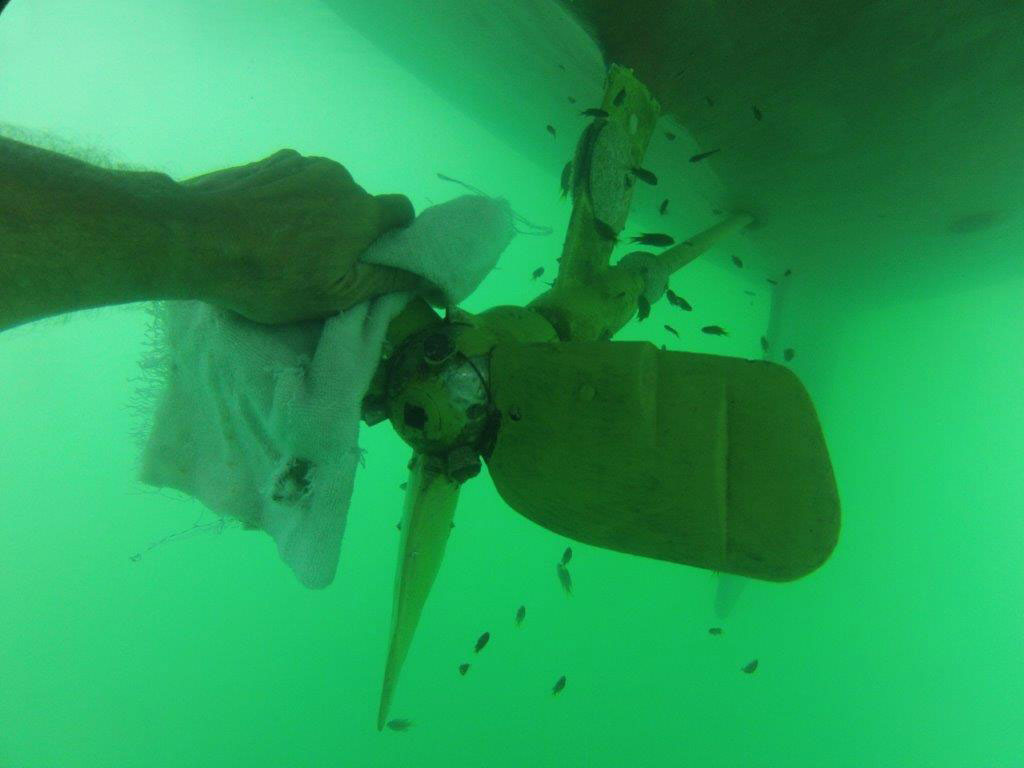 In 85-degree tropical water, the task wasn’t too daunting, but with frigid waters in their future, Patrick knew that even layers of wetsuits wouldn’t make it bearable.

“Cruising friends who have used Propspeed, a silicone coating, are very satisfied. Application is a very precise process of sanding, cleaning, etching, primer application and then the final application of a clear silicone coating. The clear coating is not antifouling but an ultra-smooth surface that marine organisms have a very difficult time attaching to. If organisms do settle, they are easily brushed off.”

Patrick applied Propspeed to Brick House’s stainless-steel drive shaft, bronze strut and its Kiwiprop, a lightweight, foldable unit with Zytel blades and stainless-steel components. Although the OEM had indicated that priming the blades beforehand wasn’t necessary, Patrick found that antifouling never adhered for what he considered an adequate amount of time. So, this time, he used Propspeed and followed the application instructions to the letter, performing the same steps he had on his metal components except for the etching. He is so far very pleased with the results.

“Four months since application, the Propspeed on our Kiwiprop is doing what it is advertised to do.” He’s also enjoying the reduced maintenance required on his part. “Once a month, I’ve gone over the side and wiped the treated areas with a cotton rag to remove slime. Normally, I’d have to use a scraper, wire brush and sandpaper." 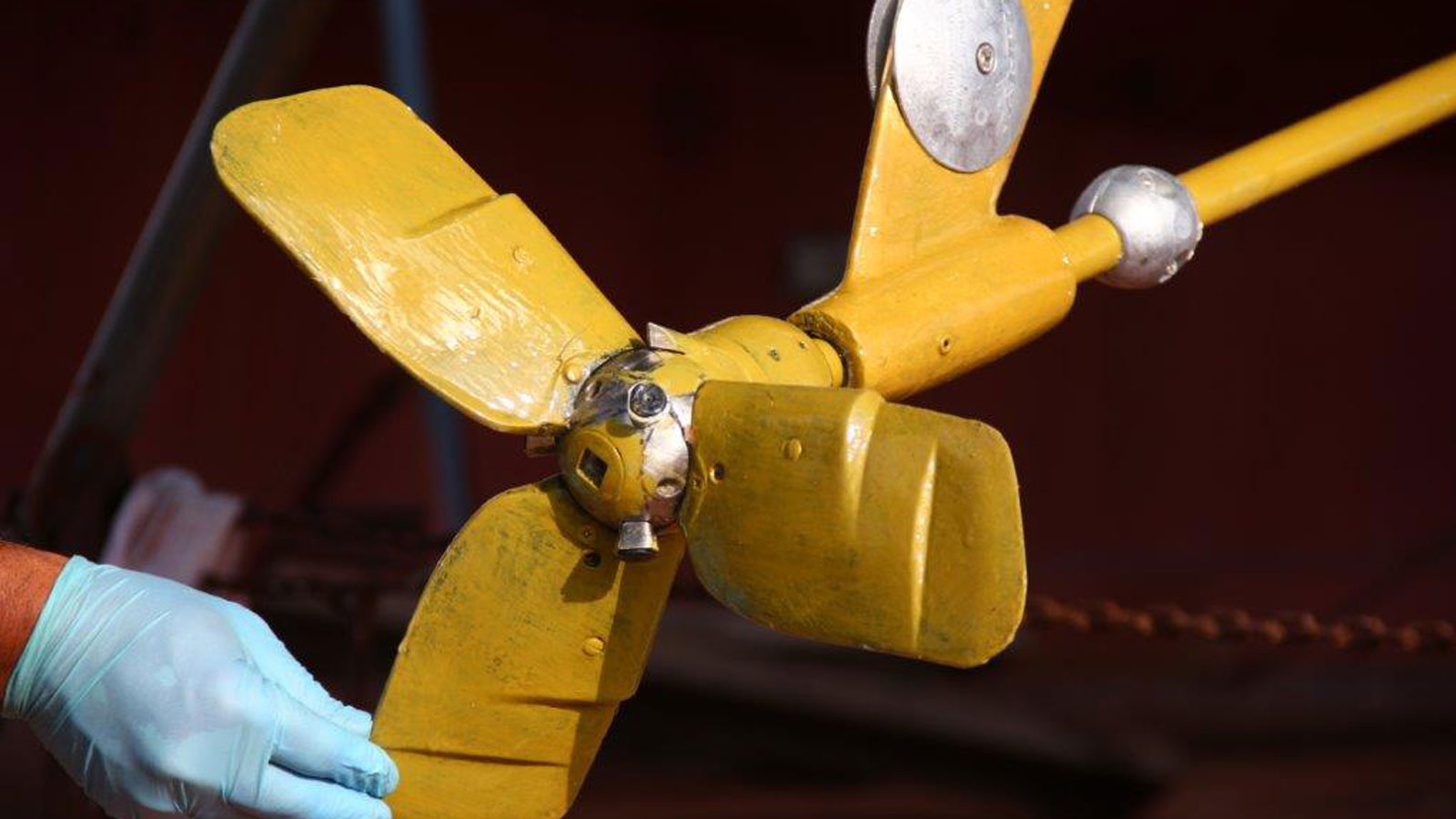 “For all the work we’ve just completed on Brick House, we should do just fine getting to Durban, South Africa, and on around to Cape Town, where we’ll begin again on the revolving list of maintenance and repairs.” Between their Manson Supreme anchor, Kiwiprop and Propspeed, the Childresses have chosen three New Zealand-made products for their floating home—choices not lightly made, given that they do actually live on board.

“Because of their sailing environment dipping into latitudes of the Roaring Forties, New Zealanders know how to manufacture their yachting products to withstand harsh conditions. Propspeed is another great product made in New Zealand. There are imitators, but only Oceanmax makes Propspeed and has a long positive track record.”

A freelance writer for sailing publications since 1980, Patrick is now branching out to YouTube, where his channel, Patrick Childress, features marine “how to” videos sharing hard-to-find information gleaned from the many installations Patrick has done himself. You can follow Patrick and Rebecca’s travels on their blog, www.WhereIsBrickHouse.com.

"Four months since application, the Propspeed on our Kiwiprop is doing what it is advertised to do."